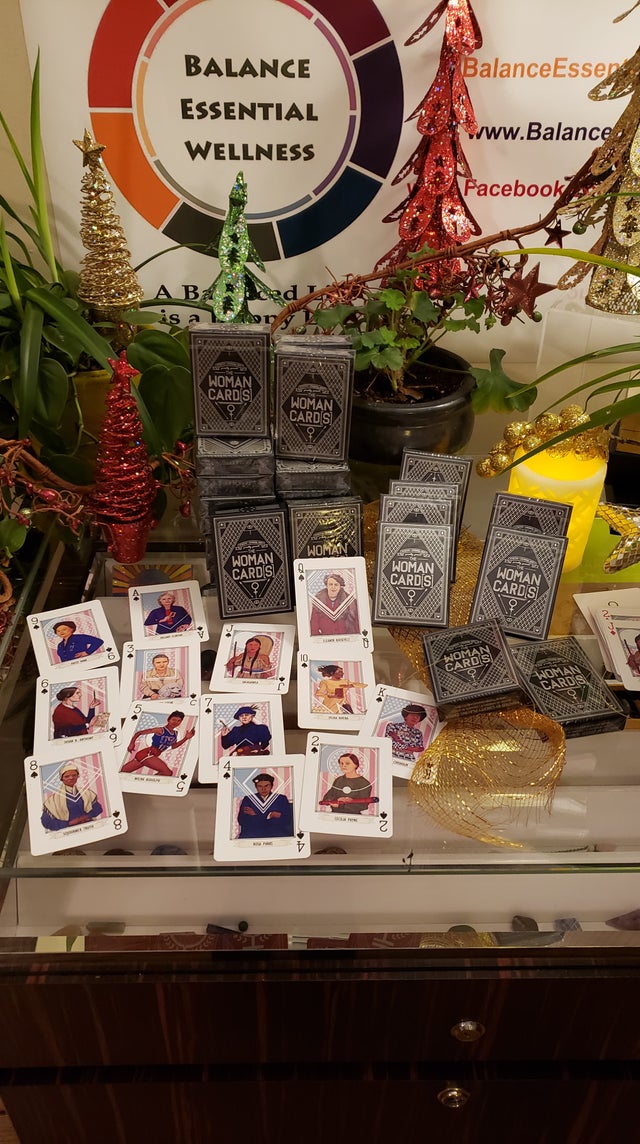 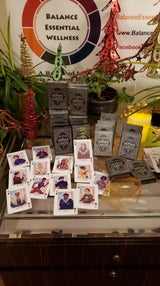 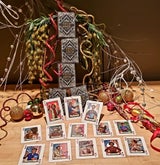 Zeb and Zach Wahls created this illustrated playing card deck to celebrate inspirational young women. These cards are beautifully designed and make a unique, educational, fun gift for the techy women on your holiday list!

This Item can be picked up by appointment at The 616 Studio or delivered locally, at no extra charge. It can also be mailed, if needed, for an additional fee. Please message or text to make arrangements.

PLAY THE WOMAN CARD: Each deck features fifteen visionary women scientists who changed the world, even though the deck was stacked against them; 13 visionary women appear on all four suits, plus 2 cheeky Jokers.

ARTFULLY CREATED: This beautifully illustrated deck of playing cards features hand-drawn portraits created by Zeb Wahls, a female illustrator and proud feminist! This deck of cards is sure to become a crowd favorite at parties and other fun social events. Featured in the National Museum of Women in the Arts.

THE FUTURE IS FEMALE: The Woman Cards: Tech Deck features fifteen fearless feminists from all walks of life, from explorers to inventors, who have fought for equal representation and who constantly inspire girls and women everywhere.

This incredible lineup of visionary women scientists features pioneers from across the world and throughout the ages:

Each woman appears in all four suits, except the Jokers—Hedy Lamar and Bindi Irwin—for a full deck of 54 cards.

King: Grace Hopper — Known by many as “Amazing Grace,” Admiral Hopper a computer scientist who enrolled in the US Navy Reserve during World War II, serving on the Mark I computer programming team. Over her decades of service, she made invaluable contributions to the advancement of computer science, and coined the phrase “computer bug.” She retired with the rank of Rear Admiral. Grace was posthumously awarded the Presidential Medal of Freedom in 2016.

Queen: Chien-Shiung Wu — Chien-Shiung Wu was a Chinese American physicist who worked on the Manhattan Project and whose contributions were so valuable she came to be known as the “Queen of Nuclear Research” and “the First Lady of Physics.” Later in her career, she was an outspoken advocate against gender discrimination.

Jack: Mae Jemison — The first African American woman to travel in space, Mae Jemison was inspired to pursue her dreams of space travel by the Star Trek character Uhura. Quoting the show, Mae often said, “Hailing frequencies open” during her mission. A true “renaissance woman,” Mae maintained a deep love of the arts and entertainment, while mastering engineering, practicing medicine, and becoming an astronaut. During her eight-day voyage, she brought along several art objects from West Africa to symbolize the universal nature of space.

10: Katherine Johnson — Katherine Johnson displayed a strong affinity for mathematics at an early age, enrolling in an advanced high school when she was only ten years old. She grew up to become a NASA computer – the human kind! – and mathematician during the Space Race, calculating the crucial orbital mechanics equation which made spaceflight possible and laid the foundation for the space shuttle program. She was awarded the Presidential Medal of Freedom in 2015 and her work was memorialized in the film Hidden Figures.

9: Ada Lovelace — Ada Lovelace was an English mathematician who wrote the first successfully executed computer algorithm. During a nine-month period in 1842 – 1843, Lovelace translated an Italian article about a proposed machine, the Analytical Engine. Her translation included an appended set of notes of her own observation and design that contained the aforementioned algorithm, illustrating that she was the first scientist to fully understand that the potential of mechanical computers far exceeded simple calculation. Consequently, she is widely regarded as the first “programmer” of computers.

8: Rachel Carson — Rachel Carson was a marine biologist and conservationist, whose book Silent Spring popularized the environmental devastation of the pesticide DDT, birthed the modern environmental movement, and saved the American Bald Eagle from near-certain extinction. She began writing at the age of eight, demonstrating at an early age her passion for animals. As an adult, her work led directly to the banning of DDT and blossomed into the founding of the Environmental Protection Agency.

7: Kalpana Chawla — Kalpana Chawla was an aerospace engineer and the first Indian American woman to travel in space. She was among the seven crew members who perished in the 2003 Columbia disaster and posthumously awarded the Congressional Space Medal of Honor. She is remembered as a national hero in India to this day.

6: Hypatia — Hypatia of Alexandria was an Egyptian mathematician living in the Eastern Roman Empire during the late fourth century A.D. and is the first woman mathematician about whose life we have much recorded detail. Her studies and writing transcended mathematics, bridging into astronomy and philosophy — six of her works survive today. She was murdered in 415 A.D. by a mob of Christians for her paganism, despite being herself known for her tolerant nature.

5: Jane Goodall — One of the world’s most famous women scientists, Jane Goodall worked extensively to document and understand the social and family interactions of wild chimpanzees over the course of 55 years of study as a primatologist. Her five-year study at the Gombe Reserve in Tanzania laid the groundwork for decades of research that established the social similarities of chimpanzees and humans. She has become one of the most widely recognized scientists of the modern age.

4: Maryam Mirzakhani — Maryam Mirzakhani was an Iranian mathematician whose work at Stanford University earned her the Fields Medal, which is awarded every four years. At the time of printing, she remains the only woman and only Iranian to have won the Fields Medal. Her research concerned the dynamics and geometry of Riemann surfaces, which are highly complex one-dimensional shapes. Her life was cut tragically short by breast cancer at the age of 40 in 2017.

3: Tu Youyou — Tu Youyou is a Chinese chemist, who led the research project that developed dihydroartemisinin, a drug used to treat malaria, one of the world’s most deadly diseases. Her work saved millions of lives from Asia to South America. She is known as the “Professor of Three Noes,” because she has no postgraduate degree, no study or research experience abroad, and no membership of any Chinese national science academies. Despite this nickname, she received the Nobel Prize in Medicine in 2015.

2: Florence Nightingale — Florence Nightingale was an English reformer and statistician who pioneered modern nursing. She is remembered as “the Lady with the Lamp” who organized care for wounded soldiers and rose to prominence during the two-year long Crimean War. As a prolific and thoughtful writer, she also pioneered the use of infographics to present complicated statistical data in digestible formats for the common people.

Big Joker: Hedy Lamar — Hedy Lamar was an American film actress and inventor. When she wasn’t starring in motion pictures as a leading lady, she enjoyed tinkering and inventing. After the outbreak of World War II, she co-created a technology intended to protect radio-controlled Allied torpedos from having their signals jammed by hostile forces. This technology was adopted by the US Navy and later became foundational for frequency technologies and paved the way for the creation of Bluetooth and Wi-Fi.

Little Joker: Bindi Irwin — Bindi Irwin is an Australian entertainer and conservationist dedicated to continuing the work of her late father Steve Irwin, introducing younger audiences to the importance of respect for animal life. She was awarded “Young Conservationist of the Year” in 2014 by the Australian Geographic Society.

(Note: "Big" Joker and "Small" Joker are designated as such for the purposes of some games that require a differentiation.)