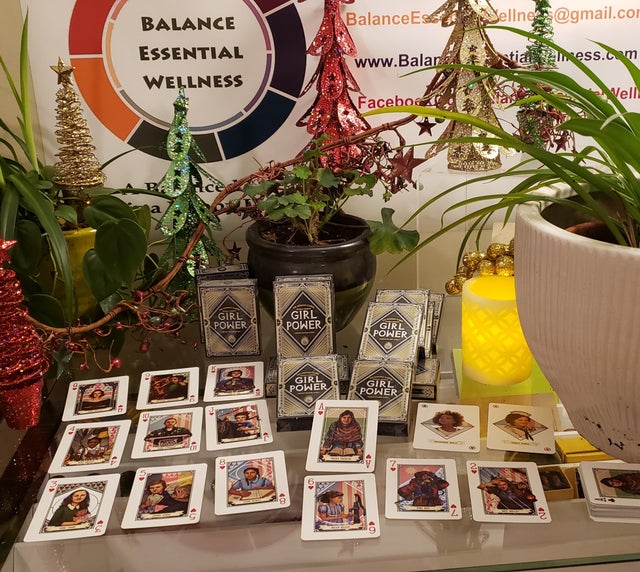 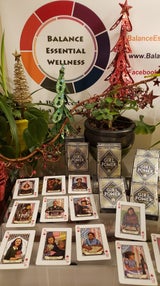 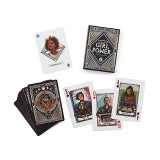 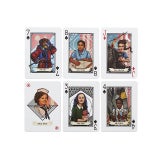 Zeb and Zach Wahls created this illustrated playing card deck to celebrate inspirational young women. These cards are beautifully designed and make a unique, educational, fun gift for the girls (and boys) on your holiday list!

This Item can be picked up by appointment at The 616 Studio or delivered locally, at no extra charge. It can also be mailed, if needed, for an additional fee. Please message or text to make arrangements.

Ace: Malala Yousafzai — When we first reached out to our past supporters about who we should include in our next deck, there was no person more nominated than Malala Yousafzai. Her courageous and inspirational work in support of female literacy led her to become the youngest-ever Nobel Prize laureate. The word "ace" denotes "one" or "single," which is why there is only one spot on the card, which we believe is perfect for Malala.

King: Joan of Arc — Divinely-inspired visions guided Joan of Arc, the illiterate daughter of a meager farmer, to meet with King Charles VII of France when she was only 17 years old. Despite initial (and understandable!) hesitation, the King dispatched her to the Siege of Orléans, attaching her as a leader to his army. The English had maintained the siege for six months — and was broken only nine days after Joan arrived. She went to lead and inspire French forces, growing every larger in life and in legend, before her capture by the English a few years later.

Queen: Mary Shelley — You've probably heard of Mary Shelley, who started writing Frankenstein when she was only eighteen years old and published when she was twenty. Her most famous book stands today as one of the most powerful stories about science, progress, and human nature. She would go on to be described as the Queen of Horror and we are excited to feature her as the Queen of our deck.

Jack: Sybil Ludington — On the night of April 26, 1777, only sixteen years old, Sybil Ludington rode to alert American militia of the imminent arrival of British soldiers — and she rode nearly twice as far as Paul Revere, despite being less than half his age. Her story was first told in an 1880 book by historian Martha Lamb and the legend of her ride has slowly grown over time. She is the Jack of our deck because the rank “Jack” was initially conceived as a “page,” who often served as messengers, which is exactly what Sybil was.

Ten: Emma Gonzalez — After the tragic shooting at Marjory Stoneman Douglas in Parkland, Emma Gonzalez and her classmates took a stand against gun violence. At the March for Our Lives, just weeks after the shooting, Emma’s speech was heard around the world, punctuated by a six-minute moment of silence that matched the duration of the shooting. After joining Twitter, she received over one million followers in just ten days, dramatically surpassing the National Rifle Association.

Nine: Artemisia Gentileschi — Artemisia Gentileschi was a groundbreaking Italian painter in the seventeenth-century Baroque period, whose talent at an early age set her apart from her male peers. Artistically, she is best known for her expressive and boundary-pushing style and for becoming the first woman to join the Accademia di Arte del Disegno in Florence. She is also well-known for her courage in participating in the prosecution of a man who sexually assaulted her when she was eighteen — during a time when such participation by women was unheard of -- nine months after her attack.

Eight: Sylvia Mendez — At the age of eight, Sylvia Mendez — who is of both Mexican and Puerto Rican heritage — played a key role in ending discrimination against Latinx students in California public schools as lead plaintiff in Mendez v Westminster. This ruling tackled the notion of “separate but equal” head-on and fully established the connection between “equal protection under the law” and public education. Mendez’s activism directly paved the way for the more famous Brown v. Board of Education seven years later.

Seven: Ming Kipa -- When Ming Kipa reached the summit of Mount Everest on May 24, 2003, she was the youngest person to ever reach the world's highest point, a record she held for seven years. She summited with her older sister, Lhapka, and her brother, Mingma. Her sister Lhapka has summited Everest nine times - more than any other woman. Ming comes from an incredible family and we're thrilled to have her in the deck.

Six: Helen Keller — When Helen Keller was only 19 months old, she contracted a disease that left her deaf and blind. Four years later, when she was six years old, Anne Sullivan led Helen to her miraculous breakthrough moment, spelling “w-a-t-e-r” while running water over Helen’s free hand. She completed a bachelor’s degree from Radcliffe College at Harvard University when she was 24, the first deaf-blind person in America to receive a bachelor’s. Widely heralded for her incredible determination and perseverance, she was a passionate advocate for people with disabilities, women’s suffrage, birth control, radical socialism, the anti-war movement, and she helped to found the American Civil Liberties Union in 1920.

5: Sophie Scholl -- Sophie Scholl was an organizer with White Rose, a student activist organization at the University of Munich dedicated to resisting the Nazi regime in Germany through non-violent means. Sophie helped to create and distribute anti-Nazi literature among German students while also overseeing the finances of White Rose. The five student leaders of White Rose resisted the Nazi regime until their arrest in 1943. Her final words were, “Such a fine, sunny day, and I have to go, but what does my death matter, if, through us, thousands of people are awakened and stirred to action?

Four: Ruby Bridges — Ruby Bridges is best known for being the first black child to attend the all-white William Frantz Elementary School in New Orleans. She was one of four kids to attend traditionally white schools in the city. It was Ruby's mother Lucille, the daughter of sharecroppers, who strongly encouraged her daughter to attend the all-white school, in order to both receive a better education and to lead for the betterment of all black Children in America. Her first day of school was memorialized in the famous Norman Rockwell painting,

"The Problem We All Live With," which served as an inspiration for our illustration.

Three: Anne Frank — Anne Frank is known worldwide for her Diary of a Young Girl, which became internationally recognized after its publication following the end of World War II. She was born in Frankfurt, Germany into a Jewish family, which fled to the Netherlands when the Nazis seized power, where she was one of three young people in the Secret Annex. She became stateless after her citizenship was revoked — which is why she is depicted without a flag in her background — in 1941. Her record of life in hiding, of coming of age, of persistence in the face of fascism, continues to inspire people of all genders and ages across the world to this day.

Two: Kate Shelley — At only 15 years old, Kate Shelley risked her life during a dangerous Iowa thunderstorm to prevent a railroad disaster. When a bridge near her family farm collapsed, she braved the wind, rain, and dark—at one point crawling across a rickety bridge over the Des Moines River with only lightning for illumination—to prevent the midnight express carrying over two hundred passengers from derailing.

Small Joker: Quvenzhane Wallis — Best known for role as “Hushpuppy” in Beasts of the Southern Wild, Quvenzhane Wallis is an American actress and author. She is the first person born in the twenty-first century — and the youngest actress ever — to be nominated for an Oscar Award. Since then, she has authored several children’s books.

(Note: "Big" Joker and "Small" Joker are designated as such for the purposes of some games that require a differentiation.)